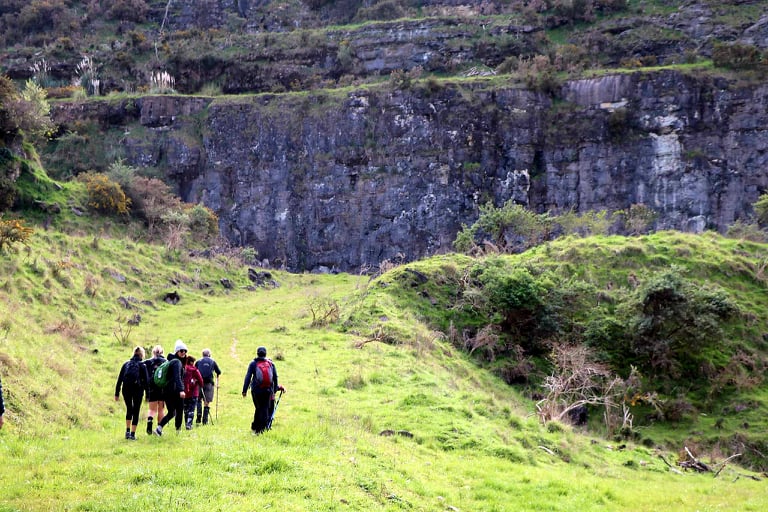 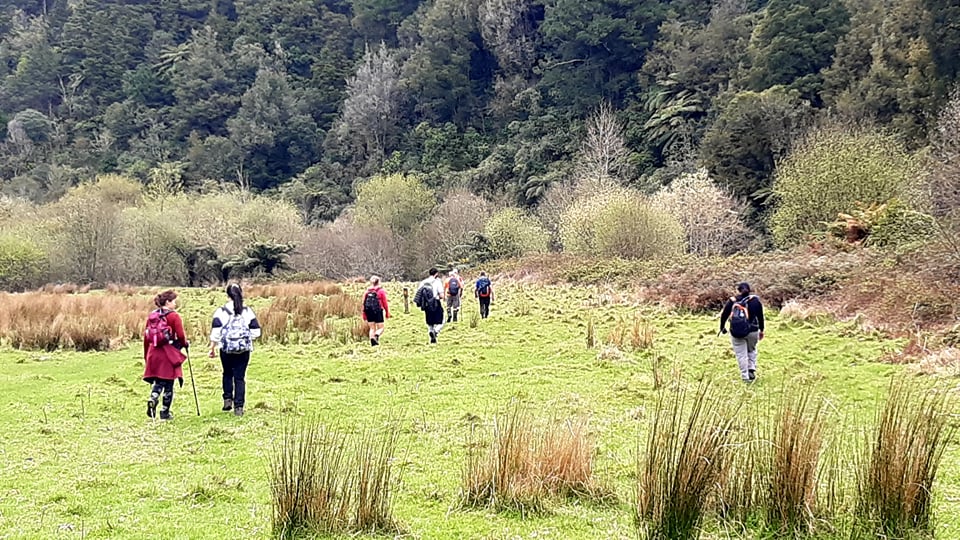 17 of us met at Mill Lane on the early Sunday morning and set off in two very comfy Mercedes vans to the start of the trail at the small Ahoroa Ford in Te Kuiti, arriving at around 9:15. The group did their laces up and we started off single file with Ian and Michiel leading the pack along the West side of the Mangaokewa stream. We followed her south through grassy areas, alongside farmland and past a couple of well sized but gentle bulls (which a few of us poked fun at) until reaching our first stile and bridge. Continuing south, crossing the bridge opened the group up to some luxury walking space along a large step of an impressive ridge face. We zigzagged back down along the steps through a waterfall bridge until the trail met the river again in typical native bush, leading to our first swing bridge, a much wider river, and the Mangaokewa reserve carpark on the other side. Before crossing over for lunch however, a large chunk of the group continued on a bit to take in a small but still beautiful section of the return track. Ooops, I almost forgot: One At A Time! By now most of us were sweating, so the group sat on rocks, snacked, hydrated and took the opportunity to remove some layers. Here we also encountered some wood pigeons. 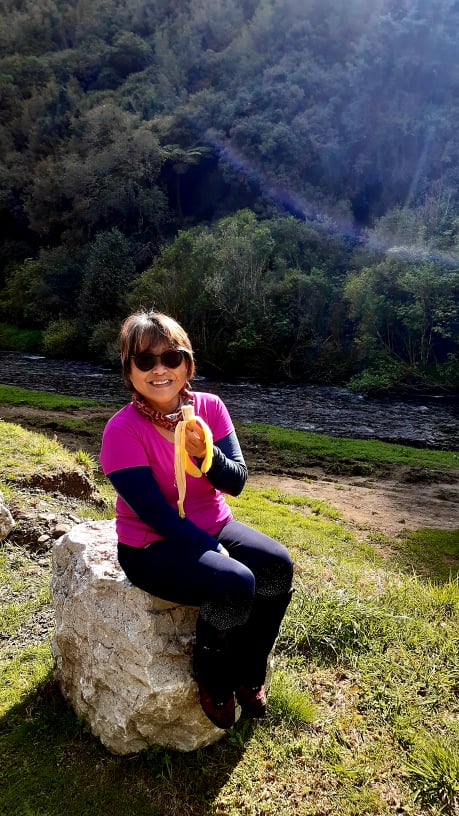 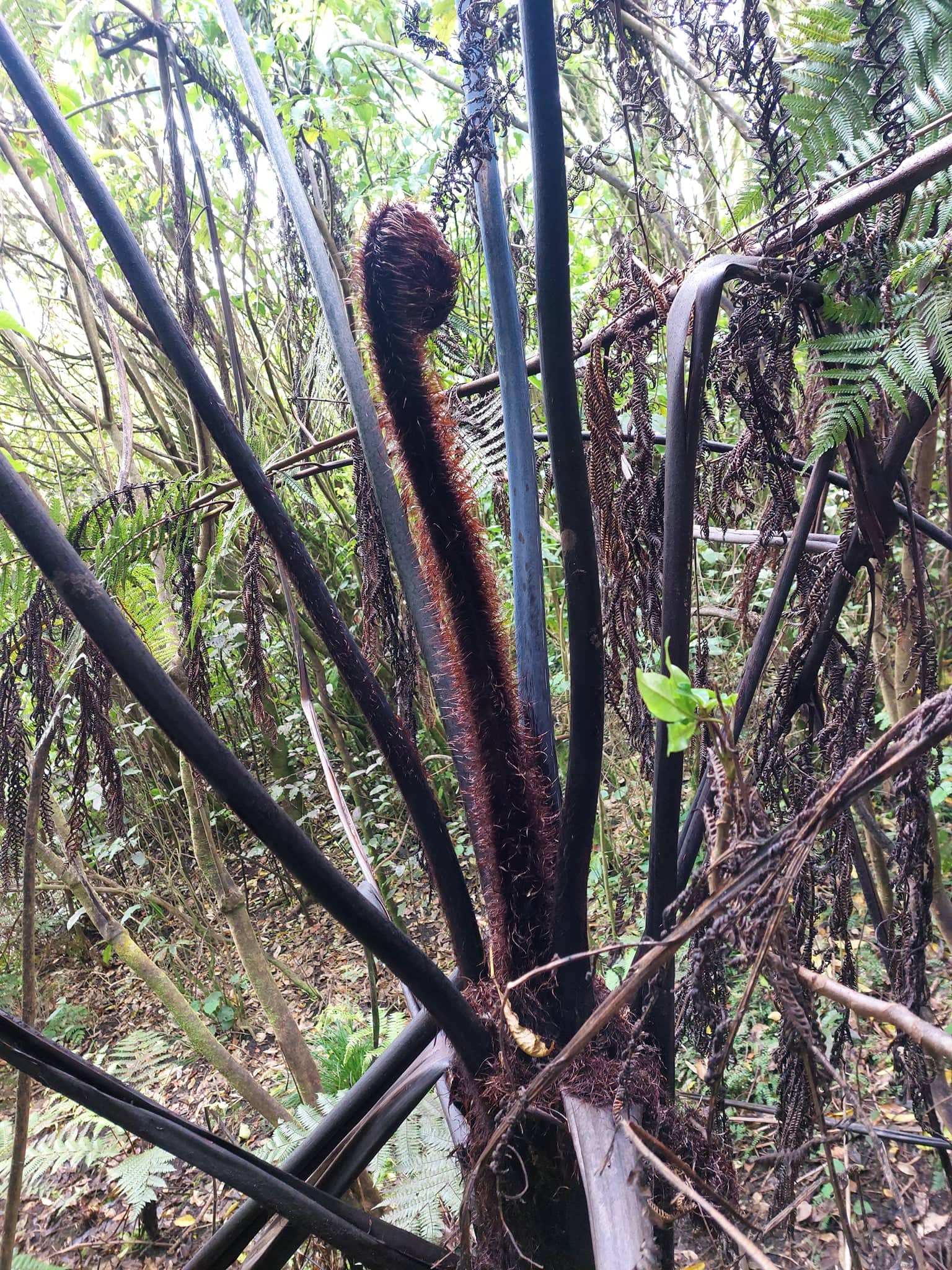 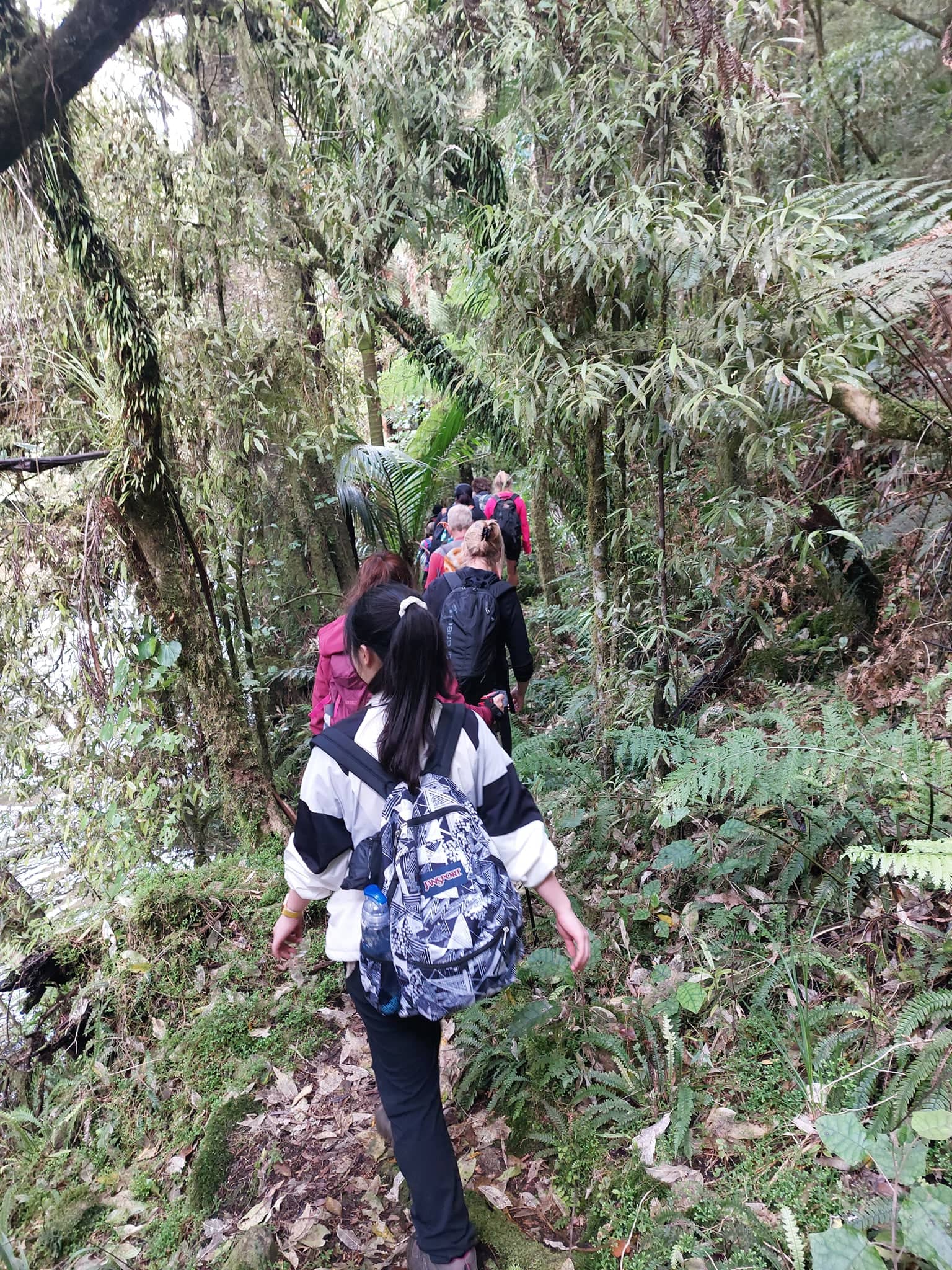 Not long after setting off along the west side, we diverted off to the right for some fun up a hunters track that arrived at a blackberry clearing, where we took a quick breather before pushing through for some rougher territory towards the top of the valley, where a great vantage point overlooking the gorge presented itself for view. Since you’re meant to sit on rocks and not stand on them, this section of the track climaxed with the quick thrill I provided to the group by doing what I shouldn’t. My apologies. 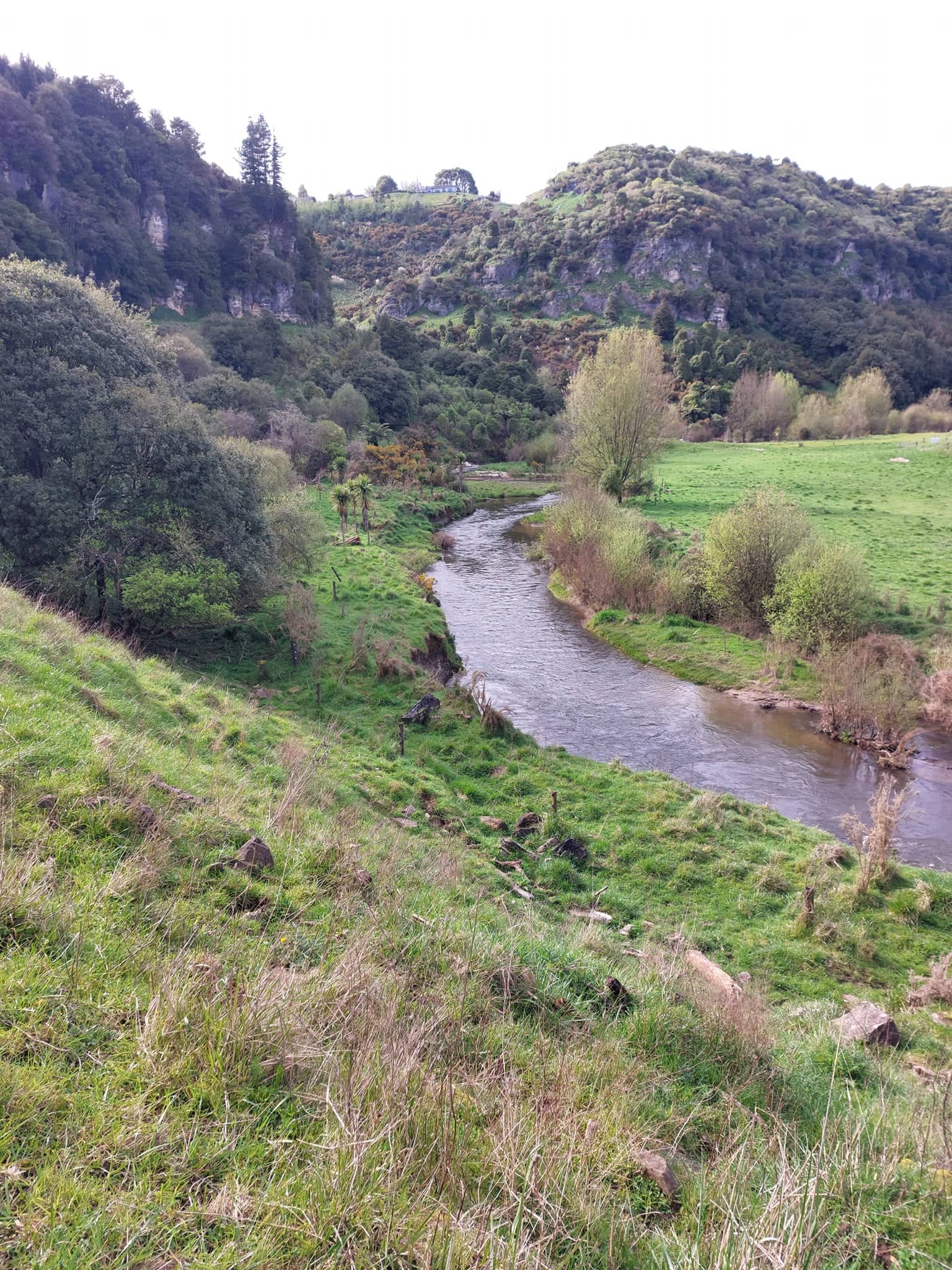 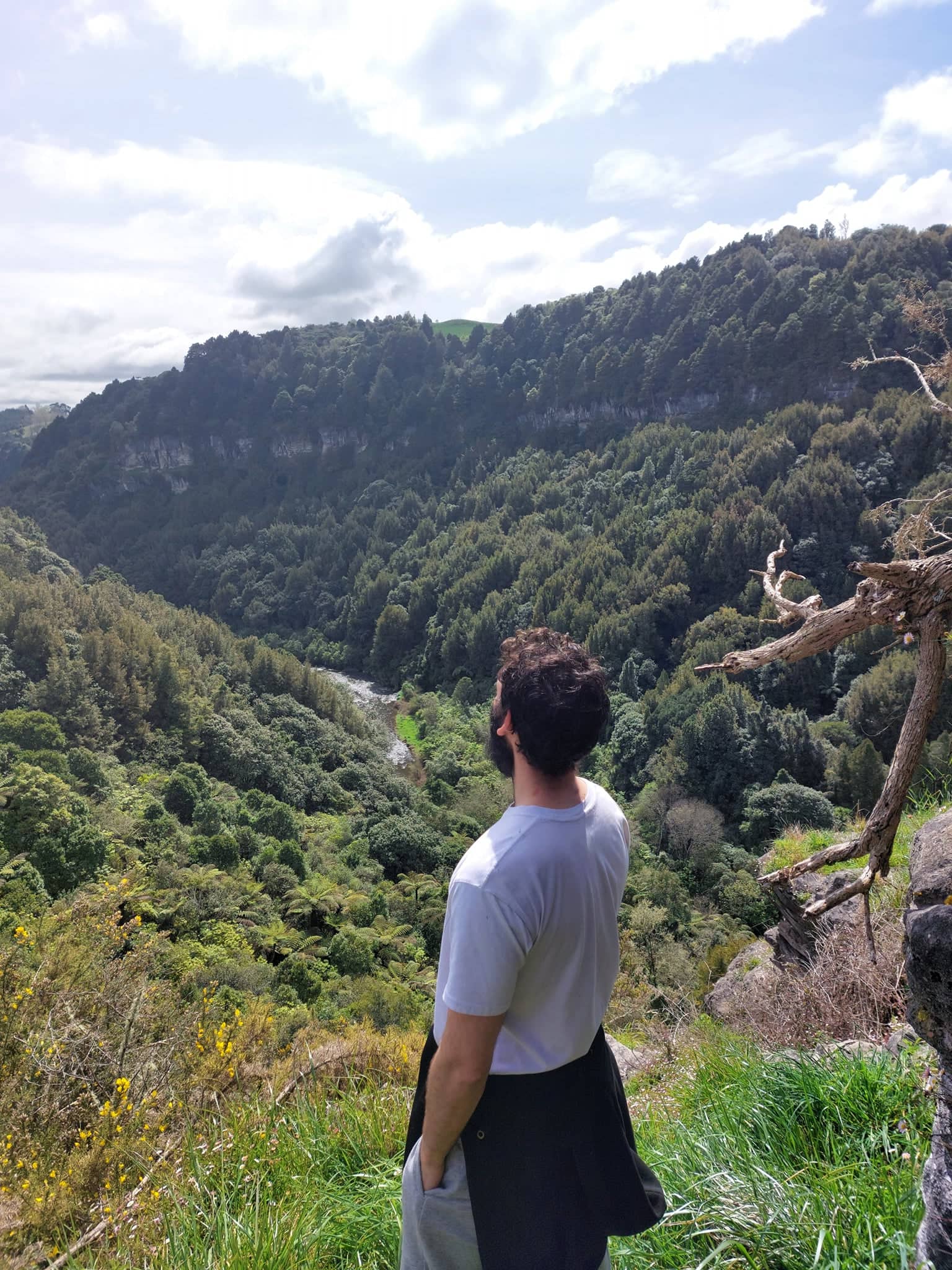 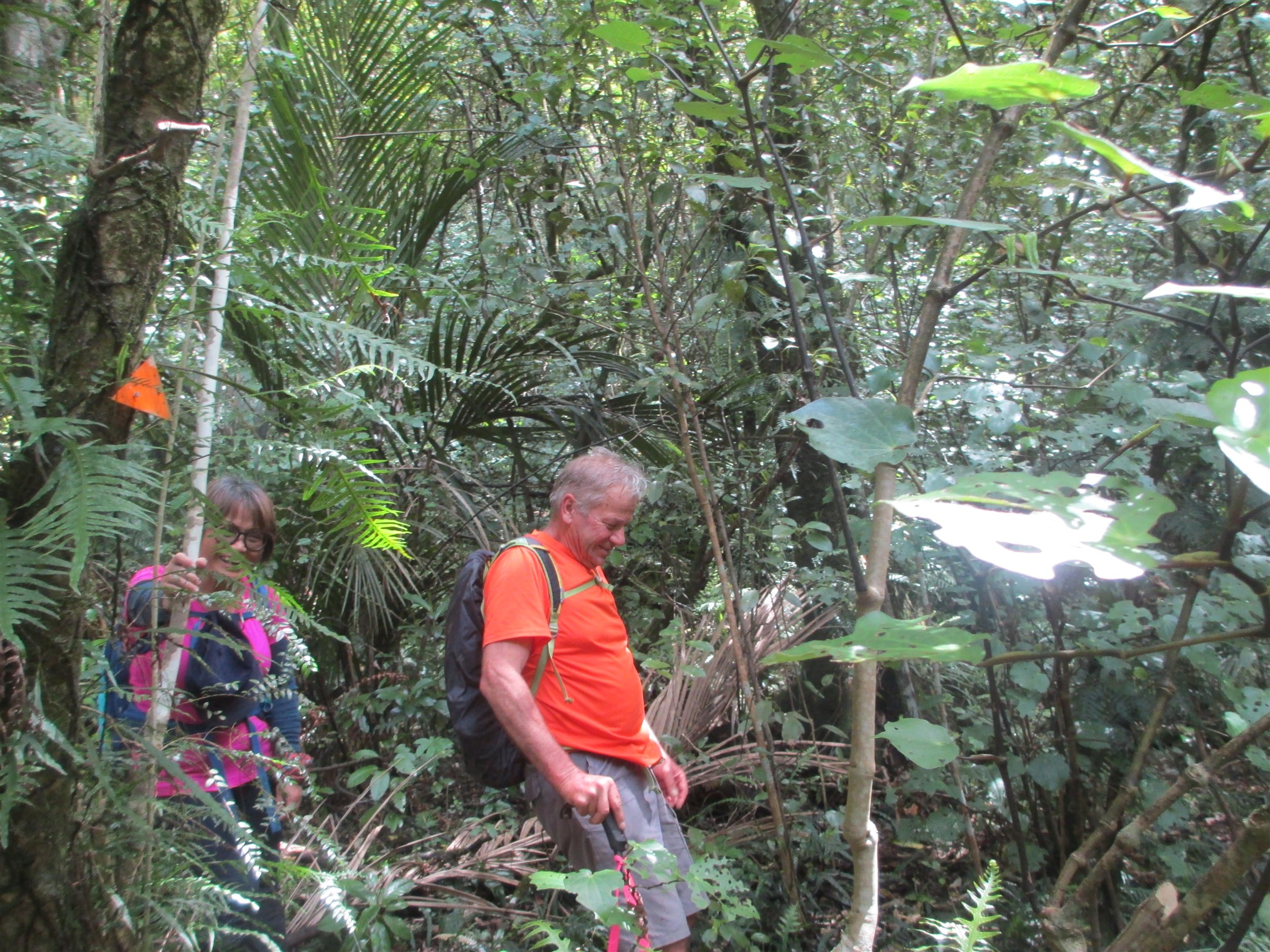 We are grateful to pack leader Ian, who had this detour in mind for us from the beginning. We reached this lookout around midday and lunch was calling, so we returned quite briskly - without the fantail who followed us on the way up - back down the same track, with the tail end of the pack now leading the way until reaching the well beaten path by the river once again. It was a bit of a bumpy ride down so Jane provided us with some chuckles and Alex taught us a new method of counting members, which we found very entertaining; unfortunately, the method is now a club secret and can't be disclosed here. Well warmed up for the rest of the tramp, we restarted south at the original fork seeking a place to eat. We passed some logs which Fiona thought to be the perfect sitting spot but we eventually landed at a grassy, shaded stretch of track for a rest, a chat and an investigation of any battle scars suffered on the excursion. A couple of Waxeyes said hello and Kevin stood to show us his run ins with the blackberry bushes just before growling away a pack of hunting dogs which got the girls a bit excited as they approached. 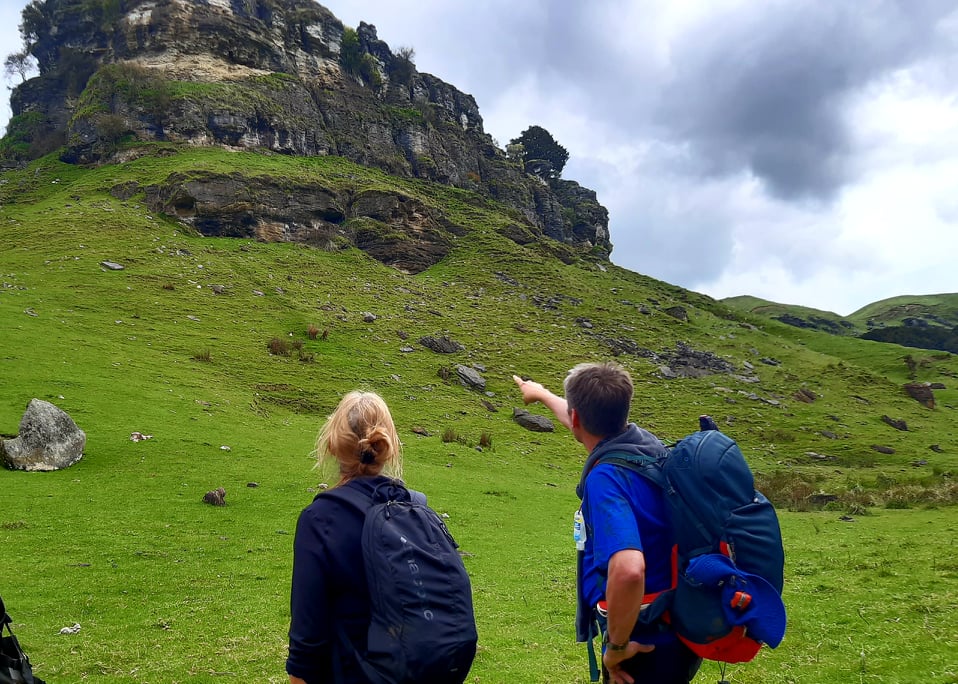 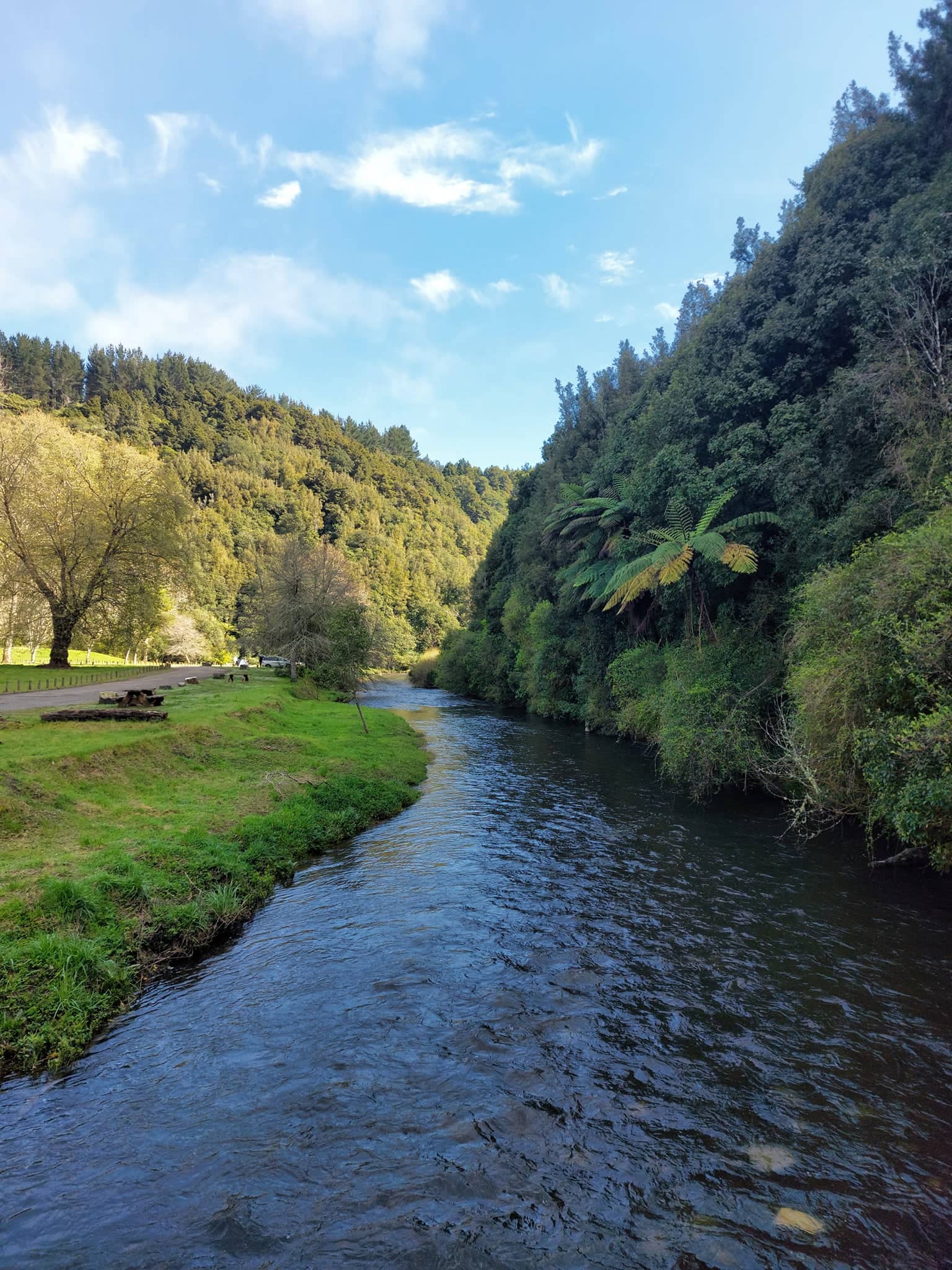 From there it was an easy walk along the river through native fauna, past a large kahikatea and some waterfalls. I spent most of this section relaxing with Keren while the adults ran up ahead and some lagged behind. One of them walked so hard he broke his walking stick, another lost her sunglasses and another dropped her lip balm. Just before the swingbridge, at around 4pm, the trail opened up to left leaning sloped farmland created by an impressive ridgeface on the right. We slowly descended down the slope to reach an open clearing next to the river, just beyond the bridge, where people took a break from each other to do their own thing for a bit and explore the area while Keren and Rohita took pictures of a duck I had already spotted. An all-round good place for photos with the sheep grazing on the ridge. We swung back east across the bridge and stopped to gaze at some Tui before starting the return trip down river. I admit at this point I was beginning to run out of juice since the first half of the tramp was a bit hard and fast, so I and probably others, resorted to group yarns and natural sights and sounds for entertainment as we wound down from the long tramp. We passed a beautiful waterfall, the campground and struggled back up the ridge steps. Jessie and I sneaked in a delightful conversation during the final hoorah of the trail and eventually we landed back at the carpark, where we took off our boots and took the tramp in. We packed into the vans and said goodbye to Te Kuiti, stopping for real fruit ice cream, professionally served, on the way back to Te Awamutu then Hamilton. Back at the carpark there wasn't much time to waste to get home, so all doors were flung open and goodbyes were quickly said, ending the eventful tramp. Thank you Ian & Carl for leading us through the events of that day and everybody for welcoming me into the group.

Webmasters comment <A Brilliant Review from Newbie Fu, you're a Fun Guy but you didn't mention the Fungi>