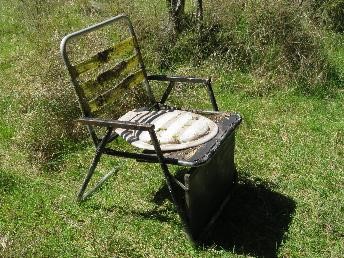 This was a trip paved with good intentions, so 7 club members set off enthusiastically on a fine Friday evening, stopping for a yummy meal at Taupo’s truck stop diner. From then on it was driving in the dark towards Napier with everyone peering intently trying to find our scheduled turn off onto Glengarry Rd, which is always further on than we think. After the turn off, the road twisted and turned, went up and down until at last we came to Kathy’s daughter’s place where we were staying the night. The blow-up mattresses were ready and waiting for us, as was a tent for Val & John, but they elected to sleep inside.

The next morning, we were welcomed by Hamish and Marie, Rusty the chocolate Labrador, other farm dogs, 2 cats, 5 pet lambs and hundreds of noisy crows in the surrounding tall trees. (The Council is going to terminate them – the crows- soon) We packed up, said our farewells and continued on our journey to the road end over a nail biting road – a road Val had declared she would never travel again! 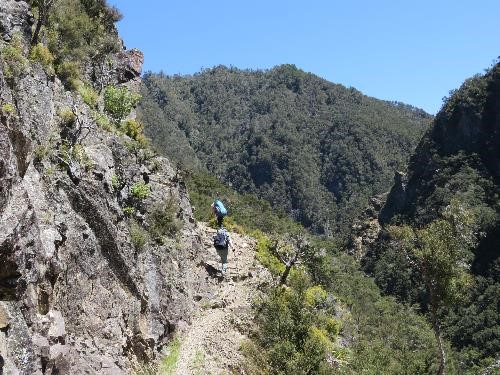 We stopped briefly at the Mangatutu Springs car park and then drove to the other car park for the track, loaded up our gear and set off on our tramp in the most glorious weather. We followed up the beautiful Mohaka River on a gently undulating track, over 3 BIG hills, saving the best until last! The track was very busy, so we were not surprized to find the hut full to over flowing with lots of families and young people. The youngest tramper was 6 years old. However 3 of our team got beds and the 2 couples had tents that we pitched on the edge of the river. Many elected to sleep out on the veranda. 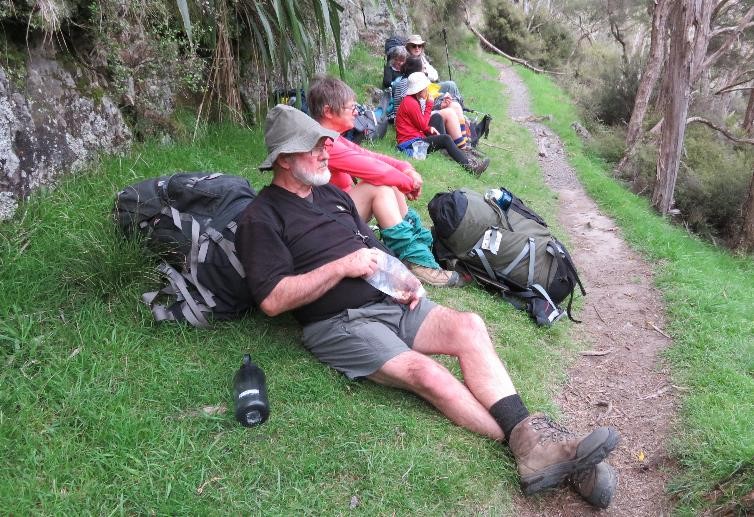 After a late lunch, we walked up the ¾ hr for a swim at the Mangatainoka hot pools. On the way, we met the friendly hut wardens, who told us where to look out for the charcoal tree remains from the big Taupo eruption. He also said there had been a big slip further upriver which had created all the pumice floating down the river and forming giant pumice rafts drifting in all the eddies. We enjoyed all the flowering clematis and late kowhai blossoms.

Many other people must have read about this trip as the whole place was crowded. The pools were chokka – so we missed out on Heaven. We met Leslie and Alan from the Waikato Club and had a leisurely chat to them instead – but that was a poor substitute for a soak in the pool. We wandered back to the hut to cook up our dinner. Blue Ducks were flying up the river and entertaining us with their whistle and antics. One family went fishing and caught a trout. In the hut, dinner was cooked by solar lights, with one guy cooking a fresh possum stew. Kathy had a cold and couldn’t smell the “mature “ possum or the overpowering freshener in the toilets. Everyone settled down to sleep until Bill got a severe cramp in his thigh. Nurse Kathy jumped to the rescue and rubbed the wrong thigh! 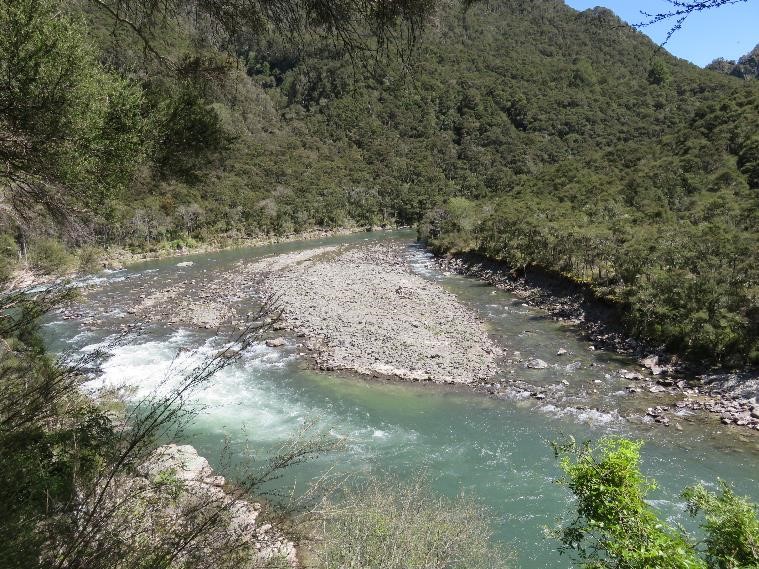 We were all up early and ready to walk before 9am. A Kaka was sighted along with the Blue Duck and Bellbirds. Long tailed and Shining Cuckoo, Grey Warblers and the Bellbirds entertained us with their song. The day was overcast and lovely for tramping and we looked forward to the hot pools at the end of the tramp. Again, the track was very busy with people coming in and out. The hills seemed easier than the day before – or perhaps we were a bit fitter. Lynne decided to go down onto a beach and thought she could walk on a raft of floating pumice. It didn’t quite hold her up and she got her feet wet. Michiel had some sticky stuff coming out of his eye that was irritating him. At least that took his mind off his foot that was recovering from a battle with his lawn mower. This was the only chance the girls have ever had of keeping up with him! Bill entertained us with stories of his enforced days of Morris Dancing as a 9 year old. 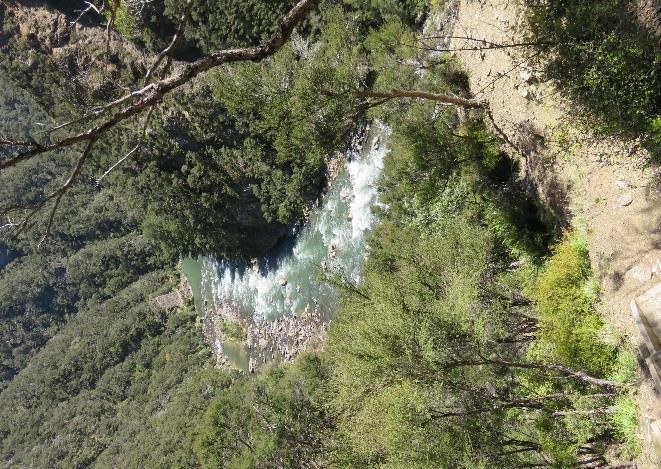 Once back at the van, we sorted out our togs and got quite excited about having a hot soak in the pools, when the leader made a decision to head straight for home – Heaven was snatched away from us once again!

The tricky drive out was uneventful and we stopped for lunch at Ball’s Clearing, where we reminisced about trips long past and sleeping under the tables. We heard a Morepork call at lunchtime – we must have woken him up. 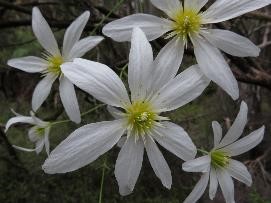 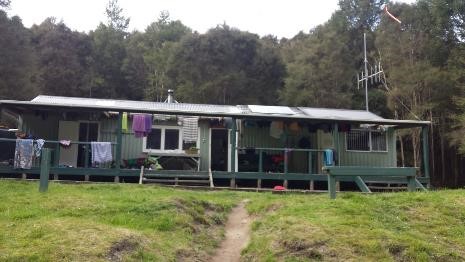 This was a very enjoyable tramp with amazing scenery, variety and good company. The only difficulty is the road, but nobody talked about near misses so everyone must drive to the conditions, and not actually getting to venture into the hot pools.