As I met with 11 other trampers on a trip to walk the Eliza Mine Track up to an abandoned mine in the Kaimai ranges, the weather forecast was for rain and thunder. At times during our drive, the rain would increase to a heavy downpour but when we arrived at the Thomson’s Track car park, the rain had eased and we were met by the sounds of many Bell Birds and Tui.

The track started out flat and the ground was quite spongy, not only from being wet, but also from being covered in several inches of fallen leaves and soft branches. After a 30 minute walk through the forest, we came to the Waitekohe Stream crossing. Those who had experience crossing rivers with a strong current formed a chain across the water for us untrained newbies. We were advised to take short steps and to find firm footing on the river bed with one foot, before lifting the other. The water wasn’t cold but it did come up to our knees.

It got a little steeper after this, we crossed a couple of bridges and streams and at one stage heard a waterfall, but due to the fog and mist, we were unable to see it.

For most of the track, the path was single file, not terribly social, but plenty of opportunity to knock your head on thick overhanging branches. Morning tea was had standing up and we were quick smart about it, to prevent getting cold. As we walked a ridge, the mist and the fog was heavy below us.

The track to the Eliza Mine branched off the track to the right. This part of the track was steeper and the trees and branches were covered in moss. We had to be careful about where we put our feet, to not stumble over the many roots.

We found the entrance to the mine and some decided to enter while others thought it looked a bit too narrow. It was a solid mine, just tall enough to stand up in and carved very straight and evenly into the mountain. The first 25 metres were only a little wet underfoot but after that, you had to step into knee deep water. A few ventured all the way to the end and the rest of us asked what they found. “Well….. the end” we were told!

At this point we had to decide whether to go on to the North South track, which would add another two hours, or head back. It didn’t take much deliberation to arrive at the decision to call it a day and come back in sunny weather to walk the full track.

On the way back, lunch was on the fly to prevent getting cold, and I had started dreaming of hot soups and steaming cups of tea at this stage.

We came to a stream crossing where the experienced ones were called up to the front to gauge whether the group would be able to cross and the decision was made that we’d better go back and cross the stream where we knew it, rather than try this unknown crossing. We simply reversed our single file with everyone turning around and heading back. There was some talk about what emergency supplies we would need, in case the streams were too high to cross or someone was injured. I realised I had only packed enough for a problem free walk in the park.

I actually really enjoyed the walk, despite the weather. As Lorna later emailed, it was a test for our raincoats: “I was pleased that, although a bit of wet had crept up underneath and up the sleeves, my core stayed dry and warm all day. I started getting a bit cold after we stopped and as we were going down-hill but the addition of my beanie fixed that”.

Once we reached the first stream crossing again, it was just as well we all considered ourselves highly experienced, as I’m sure the water was now about 15 cm higher. We wondered how much higher it would have been, if we had walked the North South track and thus arrived two hours of rain later.

Kathryn mentioned something interesting about stream crossings: “This is a great experience and one that some of us relinquish. It’s not often we get the opportunity”. I must admit, I hadn’t thought of it in that light, as stream crossings are clearly not part of every tramp, so it was good to hear a different and more positive point of view. 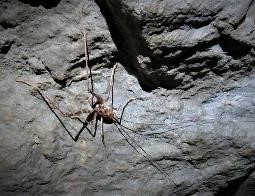 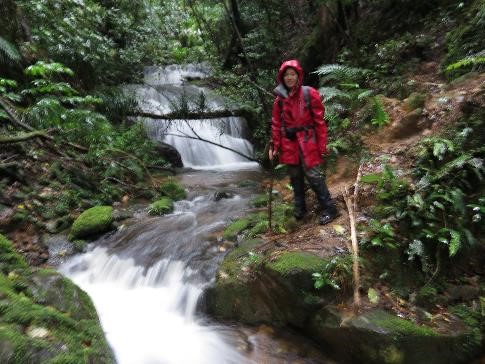 As Lorna later emailed: “It’s now 24 hrs since we have come out of the wet wet bush like drowned rats and I wonder what stories may be told at work or to family. As I said there was something to learn for all of us. For me, why did I even think that we should walk up to the ridge and back again when we had some in the group that were cold? The day certainty wasn't going to improve”.